This is going to be like a Mark Patinkin (see Mark Patinkin at ProJo) column with various, miscellaneous points that aren't really connected. I think Bill Reynolds calls it "For what it's worth," but here goes:
Now that my random list is finished, I have to go make sure that I cross post this to 14 other platforms. Maybe that's why I have a recurring activity on schedule: "update online materials."
Posted by Unknown at 6:12 AM 2 comments:

Treasure trove that makes more work, but it's fun

A couple of weeks ago, I received a wonderful cache of family photos from my mum-in-law, and have been starting to sort out who's who, and learn more about identifying people. Not being an expert with years of experience like Maureen Taylor, The Photo Detective, a fellow Rhode Islander, I have to start from scratch. But I've learned a few things along the way that I thought I would share.

1. Know the source of the photos.
The pictures that I received were people that my mom-in-law didn't know. Why? Because they were from her husbands' family. My father-in-law died in the spring, and when she was going through all of her photos looking for pictures for the collages her grandchildren assembled, she found a box of photos she had forgotten about. And then, of course, my father-in-law wasn't there to identify them, so I know that they must be related to his family, not hers.

2. Ask surviving relatives to identify the people before it's too late.
My father-in-law has one surviving sister, so she is on my list of people I need to sit down with to identify the pictures. She will recognize most of them and if fact may have already told me who they are when we identified other photos, which brings me to the next point...

3. Compare them with photos of people you already know.
Many years ago, I took pictures of my aunt's mass card collection, the same aunt who is my father-in-law's surviving sister, and should know who's in the pictures. The mass cards had been collected by her mother over the course of her lifetime. Many of the mass cards have photos on them and I can pick out at least one of the men from my unknown photos and match it to my identified photos. From there, I can make  some pretty good guesses about the surrounding folks, based on if it's a family group photo, a wedding photo or whatever.

4. Cruise the internet
Using Ancestry.com, I was able to connect to a cousin who has a copy of the same image I have, and guess what? Hers is identified! So use the web to find pictures and make sure that you share the ones you have. It's the best kind of back-up when photos are widely distributed among disparate family members, even if they are only tangentially related. Additionally, many of the photos I received had the photographer and the location on them. Use that information correlated with what you know about a family to help you with identification. If you know the photo has a Maine photographer, track down the families you know lived in Maine at some point, and go from there.

And now, a selection of some fabulous, soon to be identified photos: 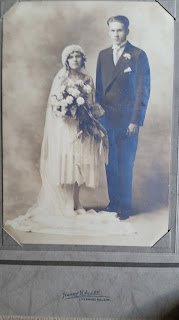 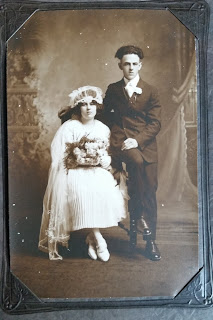 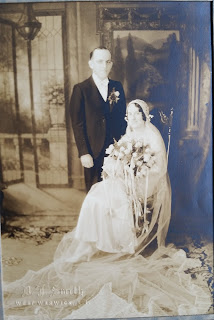 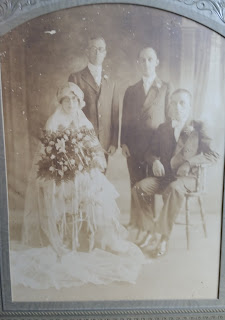